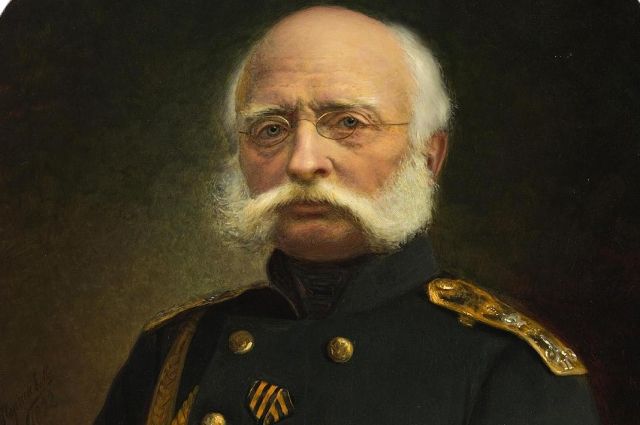 225 years ago, in January 1797, a son was born to a major of artillery, who was named Ferdinand Friedrich Georg Ludwig.

Since it happened in Pskov, then the boy later had a chance to wear a different, Russified & nbsp; name & mdash; Fedor Petrovich. But neither the surname nor the title has undergone changes & mdash; Baron Wrangel.

For those for whom there is only one Wrangel & mdash; white general and black baron during the Civil War & mdash; you have to change your mind. The Black Baron came from the Swedish branch of Wrangels, known for the fact that 22 of its representatives were killed in the Battle of Poltava in 1709. Note & mdash; They fought not for Russia, but on the side of Charles XII.

So the laurels of the Russian Wrangel, who brought true glory and honor to his homeland, should justly go to another, whose ancestors were from Denmark. The famous navigator, who circled the Earth three times, the polar explorer, the fierce opponent of the sale of Alaska & mdash; Fedor Petrovich von Wrangel. & Nbsp;

In this series of loud and pretentious characteristics, one more is somehow always lost, which refers not so much to history as to the present. The fact is that Fedor Wrangel & mdash; one of two Russian seafarers, whose names are firmly attached to the cult Russian cartoons. The first, of course, is Admiral Ivan Fedorovich Kruzenshtern , about which the cat Matroskin from the cartoon “ Winter in Prostokvashino '' speaks. And the second & mdash; just Fyodor Petrovich. Here it is already necessary to tighten up & mdash; his surname in “ pure form '' does not appear anywhere. But the character wearing it is not just mentioned, but is the main character. Moreover & mdash; this surname sounds in the title of the cartoon serial …

If anyone remembered the “ Adventures of Captain Vrungel '', congratulations. This is it. What the author of the book, according to which the animated series of the same name was filmed, the sailor and the writer directly spoke aboutAndrey Nekrasov : “After a short search, a simple association arose: Baron Munchausen , Baron Wrangel (the famous Russian sailor, after whom a large island in the Eastern Arctic is named) and, as a derivative, Captain Vrungel”; .

The most curious thing is that these two navigators, who were included in the golden fund of Russian animation, were familiar in real life. Ivan Kruzenshtern was even in some way the godfather of Wrangel. Little Ferdinand was orphaned early and was brought up in the house of his uncle Wilhelm . Kruzenshtern, who had recently returned from the first Russian circumnavigation of the world, came to visit him. & Nbsp;

Stories about Kamchatka and America, about Cape Horn and the Pacific Ocean … In general, the fate of little Wrangel was decided. Only the Naval Cadet Corps.

Wrangel's biographers wrote about his stay in the corps sparingly: “ He crossed the threshold of this educational institution, not speaking a word in Russian, and left it as an officer so Russianized that he spoke Russian much better and freer than German, knowing perfectly all the bends of Russian speech. ''

About what kind of “ bends of Russian speech '' young Wrangel learned in the corps, one can guess from his own memories, which are far from blissful: “ For pranks, the most common punishment was rods, blows of 100 or more; in companies, and sometimes in classes, cadets and midshipmen sang sailor songs. In a word, the upbringing was Spartan, the teaching was the worst … ''

But the hardening is excellent. Most likely, it was in the corps that Wrangel learned to truly achieve his goals, and not always in a legal way. He was the first of 99 graduates of 1815 who was promoted to warrant officers & mdash; this honor was given only to the cadets, the best in study, behavior and obedience. He was assigned to the frigate “ Avtroil '', which sailed on the Gulf of Finland & mdash; boredom and longing. But Wrangel learns in a roundabout way that they are recruiting for a new Russian circumnavigation. Only bad luck & mdash; the head of the expedition, the commander of the sloop “ Kamchatka '' Vasily Golovnin , takes with him only those officers whom he personally knows.

And then the midshipman decides to deceive & mdash; leaves the frigate ashore and submits a report on the disease. The admiral orders to find Wrangel and bring him on board. Here the midshipman goes to the crime & mdash; runs on a coaster to Petersburg. And he makes his way straight to Golovnin: “ I beg you to take it, at least as a sailor! ''

The courage of the city takes & mdash; Golovnin assigns the midshipman to the sloop. And & nbsp; does the right thing. Wrangel showed himself around the world as an irreplaceable person and an outstanding officer. An interesting detail. In his reports and writings, Golovnin never called his officers by name.

There are exactly two exceptions. Theopempt Lutkovsky and Fedor Wrangel. With the first, everything is clear & mdash; he was the brother of Golovnin's wife. But Wrangel was awarded this honor solely on the merits of & mdash; for perseverance, determination, firmness of character, the ability to achieve the impossible. In general, for the features expressed in the family motto of the Wrangel coat of arms: “ Frangas, non flectes ''. That is, “ You will break, but you will not bend. ''

Holy truth. He did not bend when it took several years in Kolyma and Chukotka to finally confirm Russia's priority in the discovery and development of the Northern Sea Route. The result of an expedition that lasted from 1820 to 1824. in inhumanly difficult conditions, was Wrangel's work “ A Journey through Northern Siberia and the Arctic Sea. '' It was opened with a harsh phrase: “ The vast expanse of the globe, which lies between the White Sea and the Bering Strait, is openly and described by the Russians. All attempts by seafarers of other peoples to penetrate the Arctic Sea from Europe to China or from the Great Ocean to the Atlantic are limited to the west by the Kara Sea, to the east by the meridian of the North Cape. Insurmountable obstacles that stopped foreigners in further navigation were overcome by our sailors … '' & nbsp;

But he still had to break. A big blow came when he, being the main ruler of Russian America, managed to persuade Mexico to cede the fertile lands in California, south of Fort Ross to Russia. Nicholas I then did not want to deal with the “ rebellious '' The Mexican Republic.

But the stubborn and adventurous Wrangel completely broke the government's intention to sell all Russian possessions in America. Before his eyes, the work of his whole life was crumbling. When he was given reasons that with the sale of Alaska the border would be reduced and it would be easier to ensure its security, he answered with irony: “ In this regard, one can not even regret selling Kamchatka, and leasing the Amur Territory with new ports and Sakhalin to the Americans. .. '' When the sale of Alaska became a fait accompli, he wrote: “ So, the Russian flag no longer flies on the American mainland, and the field of my intensified long-term activity passed into the wrong hands. Will the power and prosperity of Russia win in the future? It’s not for me to answer. ”

His health began to deteriorate sharply. Three years after the sale of Alaska, Wrangel died of a heart attack.